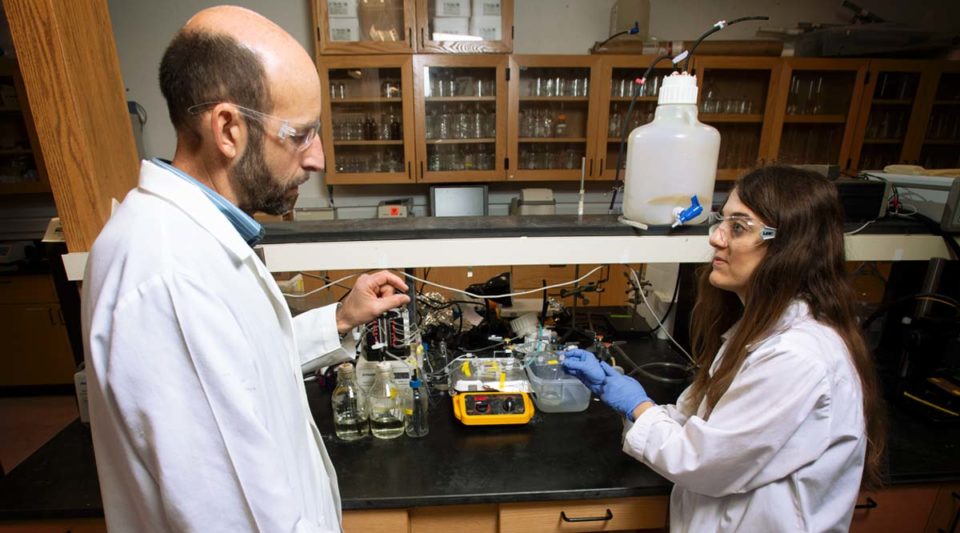 Professors Robert Nerenberg and Albert Cerrone, both faculty in Civil and Environmental Engineering and Earth Sciences at Notre Dame, are developing ways to improve the health and quality of life for people with cystic fibrosis, the genetic disease that can cause persistent lung infections and limit the ability to breathe.

They are applying their expertise in environmental biofilms, mechanics, and materials modeling to design a novel therapy using bioacoustics that could enhance how acute infections of the lung are managed.

The airways of cystic fibrosis patients fill with a thick mucus that is a breeding ground for bacteria and fungi. When colonized by these microorganisms, the mucus becomes part of a biofilm. Current therapies use nebulized antibiotics and a vibratory vest to mechanically dislodge the biofilm. But once it’s established, the biofilm is difficult to suppress.

“Biofilms are known for their resistance to antibiotics,” said Nerenberg (above, with Ph.D. student Yanina Nahum). “We believe the bioacoustic effect — low-frequency ultrasound (sonication) in combination with antibiotics — will make the bacteria more responsive to antibiotics.”

According to Cerrone, the bioacoustic effect has already shown great promise with single-culture biofilms.

“The next step is to understand the effect in mixed cultures because the airways of cystic fibrosis patients are colonized by different species of bacteria,” he said.

“Antibiotics have different effectiveness against different bacteria. This means antibiotic regimens might inadvertently target some bacteria over others, allowing the survivors to grow uninhibitedly.”

Nerenberg and Cerrone believe that low-frequency ultrasound might be the great equalizer for different bacteria. While they have not yet confirmed the underlying mechanisms, they believe that ultrasound produces intrinsic changes in bacterial cells, which makes them more susceptible to antibiotics. Ultrasound also could “cut” a network of channels in the biofilm to facilitate antibiotic transport.

“Our goal is to develop a simple, mechanics-based strategy that works with existing therapies,” said Cerrone. “This is especially important for cystic fibrosis patients, as some of the antibiotics used for treatment are toxic. Finding ways to make the antibiotics more effective, even reducing dosage amounts, could prevent unwanted secondary effects.

“We may eventually be able to incorporate low-frequency ultrasound into an upgraded cystic fibrosis vest as a way to efficiently provide the new combination therapy for patients in their homes.”

Notre Dame engineering students also are working on the project. Nahum is measuring how single-culture biofilms respond to the combination therapy. She is focusing on viability, antibiotic kinetics, and the mechanical properties of biofilms.

Neila Gross, a senior studying chemical engineering, is observing the disrupting effect of low-frequency ultrasound on biofilms. Both students have used the confocal microscope in the Notre Dame Integrated Imaging Facility to record novel spatiotemporal measurements of sonicated biofilms.

The Notre Dame team will partner with Andrea Ravasio, a biomedical engineer from Pontificia Universidad Católica de Chile. Ravasio is an expert in lung modeling. He will assist the team in modeling environments that are more representative of lung airways.

The project is supported with a 1-year seed grant from the Institute for Precision Health at Notre Dame.